I decided to arrive in Seville at four in the afternoon during August; big mistake. As I stepped off the bus from Malaga, the suffocating heat smacked me in the face and clogged up my throat. I felt like I’d just jumped out from a massive freezer into the Sahara desert. Sweat started to seep out my pours. A group of darkly tanned lads were collapsed on a bench, suffering from the heat, gasping for air. I threw on my rucksack, took a massive glug of water, and started walking. 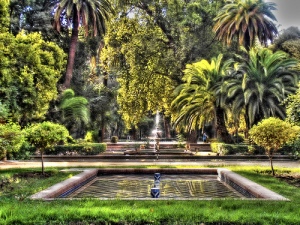 As I left the bus station the heat intensified. I passed a couple of white taxis parked under some withered trees. The drivers were inside snoozing behind the wheels. Of course, this is Spain; everyone must be taking a siesta.

Walking with a rucksack again felt great. I’d thought about travelling every day for the last two months while working in London. I was relieved to be back on the road, starting a new adventure, but unaware of the extent to which my life was about to change.

As usual I’d picked the cheapest hostel I could find, trying to save my cash until I found a job. I only had about €1,000 saved up and needed to get something fast if I didn’t want to end up back in London. I must have been a bit mental back then (at least a bit more than I am now); the hostel was at least forty minutes walk away from the centre of Seville.

I slugged my way alongside Maria Luisa Park, trying to keep cool under the shaded trees, but it was useless. Sweat continued to pour. How was I going to live in such heat? I thought, as I reached the end of the road by a roundabout. I crossed over a four lane avenue and walked along a dusty path, gazing through some railings at the glistening River Guadalquivir. I considered jumping in, but I’d been warned of the filthy conditions. “No one swims in the river in Seville,” a friend had told me.

After another kilometre or so, I checked in to the youth hostel. It was fine, but only fine. There were about four or five empty beds in the dorm. I chucked my bag down on one, grabbed my valuables and headed straight back into town. I had to check my emails to see if I’d heard from anyone about a flat.

Walking was easier without the strain of my rucksack and soon I came to the Avenida Constitution, which used to be a road, but now it’s only for pedestrians. Not that there were many people about. It was approaching 6pm and the streets were still deserted. Everyone must still be having a siesta, I thought.

I remember thinking that Seville was pretty, but dull. I’d expected to see a lot more activity. I don’t remember being impressed by the cathedral. I wasn’t that bothered about things like that back then. I just wanted to check my mails and find out if I had a place to stay.

A lad called David had written to me. He was meeting someone about a flat that afternoon in Triana. I wrote down his number, left the internet café, and gave him a call. I felt nervous about having to speak Spanish, it had been a while.

“Great, can I come and see the flat today?”

“Sure, it’s in Triana, have you got the address?

“Excellent, see you then.” That was easy enough.

I had time to kill so I walked down towards the river. When I saw it, I immediately felt peace. It’s funny if I think back to that first day. I’d arrived with nothing, just a rucksack and the hope of finding a job teaching English and learning some Spanish. I sat on a bench under some trees along from the Triana Bridge, unaware just how important that part of Seville would become to me. I had no idea that I’d soon be walking down there hand in hands with a girlfriend, and later my wife. I had no idea that in the church directly opposite I’d get married, and certainly no idea that in a few years I’d be pushing down a pram with my baby boy.

Looking back towards Seville from the Triana Bridge was impressive. The city was already starting to grow on me. Plaza España in the distance and the Giralda towering over the city were symbolic. How many photos would I take on that bridge over the next few years? Bloody loads.

Triana looked old and a lot more like the traditional Spain I’d imagined. Finally people were emerging from their air-conditioned flats. Kids played in the streets, couples skipped along hand in hand, and old ladies sat on benches gossiping.

I arrived on time at the flat but no one was outside. The air was still sticky. I waited and gazed up at the hospital opposite. After a few minutes a group of three people appeared, all looking over at me.

“Vale, I’m David, this is Vincente,” he said presenting a taller stocky chap with short red hair. “And this is the landlady,” he added, pointing to a woman in her late fifties dressed as if she was about to go for a wedding.

As we climbed the stairs, I began to feel excited. I was on a new adventure, about to find a flat so I could live abroad again. As the landlady showed us round I noticed a funny fishy smell lingering. The flat was standard, three bedrooms, lounge, bathroom and kitchen.

“There is lots of light,” said David as he pulled up the shutters. I nodded as I blinked. “What do you think?” he asked.

“It’s great,” I said, smiling. It was the best I was going to get in such a short space of time. They began to chat in Spanish and I didn’t really get what they were talking about. When the lady pulled out what seemed like a contract I got nervous. Were they expecting me to sign up straight away? I didn’t even know the guys yet and hadn’t spoken to Vincente. And what was that fishy smell?

“So when can you move in?” said David.

“Err…” I said, not sure what to say. Did I really want to commit so soon?

“It’s a great flat,” said Vincente, I could detect a French accent. Did I want to live with a French guy?

The lady spoke again, but firmer.

“She says we need to sign today or someone else will take it. What do you say?”

I felt the pressure, but was also aware that sometimes you just have to go with the flow. It was all happening so quickly. I wasn’t used to such spontaneous decisions, but hey, what else was I going to find.

“Sure, let’s do it,” I said, holding my tongue about the fish smell.

“Fine, that’s four hundred Euros each. One month rent and one month deposit.” It was more than I’d bargained for, but I had the money, just.

“Okay, I’ll have to get the money out the bank. Can I give it to you tomorrow?” David translated. The woman wasn’t happy, but she agreed.

We signed the contract. The deal was done, for the next nine months.

“Shall we go for a beer?” I said, hoping to get to know my new room-mates before actually paying any money.

As we walked back down towards the river, I felt nervous, but also excited. Finding a flat on my first day had been lucky. As we sat by the river and had a small beer, I felt confident that David and Vincente were good lads. Little did I know what would happen over the next nine months; appearances can be deceiving.

3 thoughts on “First impressions of Seville”

Author of From Something Old, The Road to Zoe, You Then Me Now, Things We Never Said, The Bottle of Tears, The Other Son, The Photographer's Wife, The Half-Life of Hannah, the 50 Reasons Series. And more...

leaving the world for home, then returning to Ecuador

A chronicling of my adventures teaching in different countries.

the adventures of a texas native

A writer writes ... Telling stories of heroes, including my own

A travel blog about living abroad and calling Colombia home

A peek into the life of an American teacher in Colombia

Ramblings of a twenty something

Not all who are lost need to be found.

Life is strange but you can always learn or love or laugh or cry or shout or write, depending on the day.

A Writing Portfolio and Blog